The nice weather and dry conditions have led some to think about the start of planting. My opinion, it is too early. Remember crop insurance replant dates are not until April 11. Use the extra days to get plans in order and a little rest and relaxation before the pace picks up. Corn planting Optimum

The nice weather and dry conditions have led some to think about the start of planting. My opinion, it is too early. Remember crop insurance replant dates are not until April 11. Use the extra days to get plans in order and a little rest and relaxation before the pace picks up.

Optimum Iowa corn planting dates generally range from mid-April to mid-May, but as explained in the Guide to Corn Planting, a fixed planting date recommendation is not viable. The optimum planting date is dictated now by soil temperature and moisture. In general, look to plant corn once soil temperatures have risen above 50oF and are expected to continue to rise. Soil moisture often causes delays in planting, however, if dry weather continues into the spring planting, soil moisture will likely not be a hinderance to planting.

When considering the differences between early-planting and late planting, yields are reduced less from planting too early compared to planting too late. Planting early during the optimum window (April 11 to May 18) is generally a better practice than planting a after the optimum window. If possible, plant corn prior to May 18 to avoid this “slippery slope” of rapidly reducing yield potential. 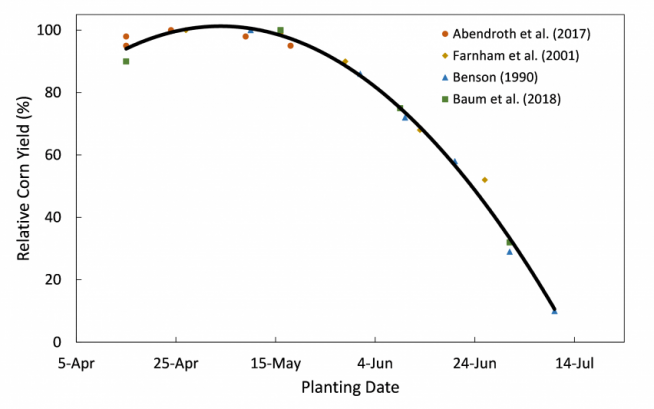 Early planting can even have soybean seed placed in colder soils and you should expect slower emergence, but in most cases, it will not negatively influence yield. Soybeans can easily germinate in 50-degree soil temperatures at two inches. You need to make sure the soil is not too cold though, or too wet. Planting soybean early is not advisable until you have good seedbed conditions.

Soybean planting as earlier than April 25can result in higher soybean yields but this higher yield potential is not consistent from year to year. However, it is much more important to plant early to ensure soybean planting is complete by May 20 before late planting causes large hits to soybean yields. 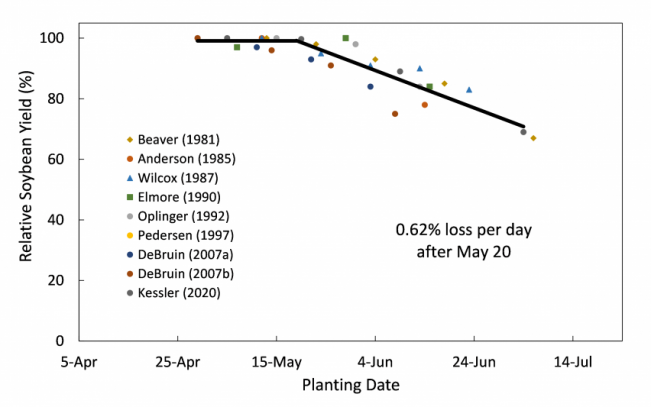 In an ideal situation, planting corn and soybean simultaneously would be the best option. This can help reduce risk by spreading growth and development to avoid detrimental effect from weather stress. This would make for a wider harvest window too. Honestly, there is not much research on soybean planting earlier than April 20. In all likelihood, yield potential would likely be similar to corn response prior to April 20. Having said that, after mid-May it is clear that soybean yield potential remains much higher than corn. Because of this, it only makes sense to prioritize corn planting to minimize the yield penalty from delayed planting. While this yield penalty also occurs for soybean, it is not as costly. 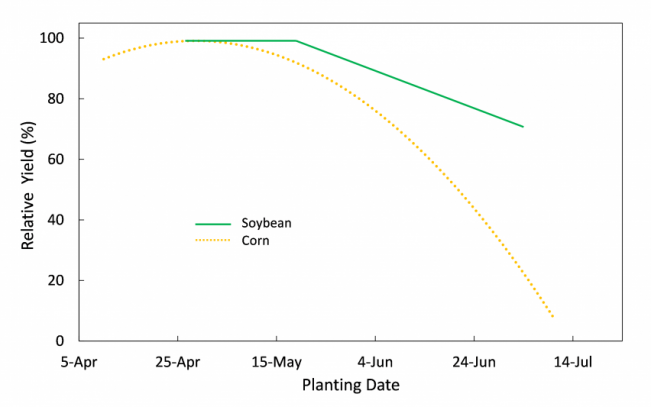 Planting early ensures you will not be planting late, but it does not mean that you will not have to replant. Think back to the last 10 years, how frequently has there been a cold spell with frost the last week of April or even the first week of May? Yes, this risk is much greater in northern Iowa than southern Iowa. Understand this frost risk that can cause a need for replanting due to poor emergence and stand establishment.

Your email address will not be published. Required fields are marked with *