Expectations for Volunteer Corn This Spring

Volunteer corn remains high on many minds this spring and one of the biggest questions is how much of those corn seed will germinate this spring. In an effort to learn more about the challenge we’re facing, Bob Hartzler collected soil and corn ears from the same fields he collected from last fall. To remind

Volunteer corn remains high on many minds this spring and one of the biggest questions is how much of those corn seed will germinate this spring. In an effort to learn more about the challenge we’re facing, Bob Hartzler collected soil and corn ears from the same fields he collected from last fall. To remind the reader, soil was collected and sifted from several 12” by 12” by 6” depth areas in mid-October to determine how many ungerminated corn kernels were left in the soil in a field that was disked under in late August and early September. Bob found that there were about 31 seed in each of these areas, leaving a huge potential for volunteer corn this spring. You can read more about the fall check here. 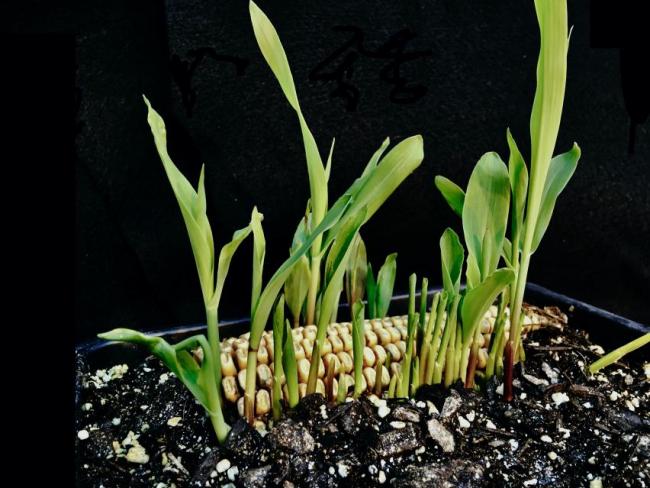 This spring, Bob returned to the field and collected soil from several 12” by 12” by 6” depth areas, as well as several full or partial ears. Soil was spread in greenhouse flats to determine viability of loose kernels in the soil. Kernels on corn ears were evaluated in multiple ways. We shelled 100 kernels from several ears and buried those kernels either 1” deep in potting mix or spread them on the surface. Finally, several ears were either laid on the potting mix surface or partially buried in potting mix to evaluate how much germination we may expect to see from ears remaining in the field. 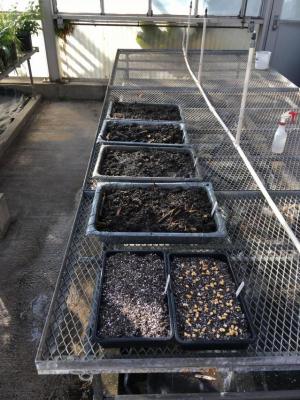 We evaluated germination from the different flats a week after planting them. Germination was much lower than expected given the significant presence of volunteer corn in fields last fall.

What happened to the germ?

A conversation with seed scientist Susana Goggi revealed what might be responsible for the low germination in this small sampling. The Derecho storms damaged crops on August 10, 2020, approximately 20 days before most corn seed reached physiological maturity.  Seed would be germinable at this stage but unable to tolerate desiccation.  Thus, some of the seed from storm-damaged fields germinated last fall, but much of the seed that didn’t germinate likely died during the desiccation process. The inability to survive desiccation likely explains the lack of germination of loose seed that was present in the soil last fall. Apparently some of the seed retained on ears survived desiccation and remained viable this spring.

What should we expect this spring?

The amount of viable corn seed, and therefore volunteer corn, will vary widely from field to field. In fields where the corn crop was destroyed shortly following the Derecho the amount of viable corn seed will be reduced due to inability of the seed to survive desiccation. Viable seed will be much higher in fields where destruction of the crop was delayed or in fields that were harvested but significant harvest losses occurred. Fields likely will have clumps of volunteer corn developing from fallen ears. There are pros and cons to this, the competitiveness of the volunteer corn with the crop will be reduced since they are in such close proximity there will be a lot of competition among themselves. However, the volunteer corn clumps can be more difficult to control due to inability to get sufficient spray coverage.

Although only a small percentage of seed collected from the field this spring germinated, there was enough seed on ears remaining in the field to create a significant management challenge this spring. Any field with downed corn that was destroyed/tilled or fields with significant harvest losses will face a volunteer corn management problem this spring and farmers should make sure they have a plan for dealing with the volunteer corn before planting the 2021 crop.

Your email address will not be published. Required fields are marked with *